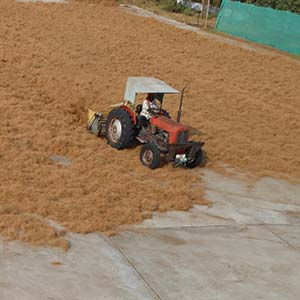 Coir fibre is the major product that is extracted from the coconut husk. Coir fibres have a multitude of different applications and they are available in blocks and bales as well. The coir fibres are generally used in the production of ropes, mats and mattresses. The coir fibres that are extracted from the inner layer of the outer part of the coir husk are used in large scale production of the ropes, mattresses and brushes.

Coir fibre is also the main product used in manufacturing the geotextiles. Geotextiles have a wide range of uses. But it is mainly used in limiting the soil erosion. Soil erosion has become one of the most prevalent problems of our society. Although there are various methods for limiting it but the erosion can be successfully kept in check by the use of geotextiles. Moreover, the geotextiles are also used in various types of road works and for surrounding the dams.

We deliver as per the customer requirements

Write us a Message! (or) Email to : [email protected]
Let's work together